British regional airline Flybe has gone into administration, shut down its operations and cancelled all of its flights. All aircrafts are grounded and passengers with a Flybe booking are advised not to go to the airport unless they have made arrangements for an alternative flight with another airline, something which will not be handled and covered by Flybe.

The airline has struggled financially for a long time and have been seeking new investments. However the sharp drop in passenger numbers as a result of the Coronavirus made the situation unmanageable and gave the management no choice but to go into administration in the early morning of 5 March.

Flybe was founded in 1979 as Jersey European Airways and celebrated its 40th anniversary in November 2019. The airline carries eight million passengers a year. and over 2000 jobs will be affected.

The Flybe bankruptcy will have a massive impact in the infrastructure of the United Kingdom, especially for some smaller UK cities, some rural areas and for domestic routes which are not to or from London or when travelling via London is not a viable option. Cities such as Exeter, Southampton and Belfast, where Flybe had large operations, will surely face some difficulties. Flybe also operated a number of other important domestic routes such as Southampton-Glasgow, Manchester-Newquay and Birmingham-Edinburgh, which are rather time-consuming to cover by train or car or by flying via London using the British Airways network.

Most likely some of the important routes will be picked up by someone else, but it might take some time. And who is willing to make an investment given the travel situation right now in the wake of the Covid-19? 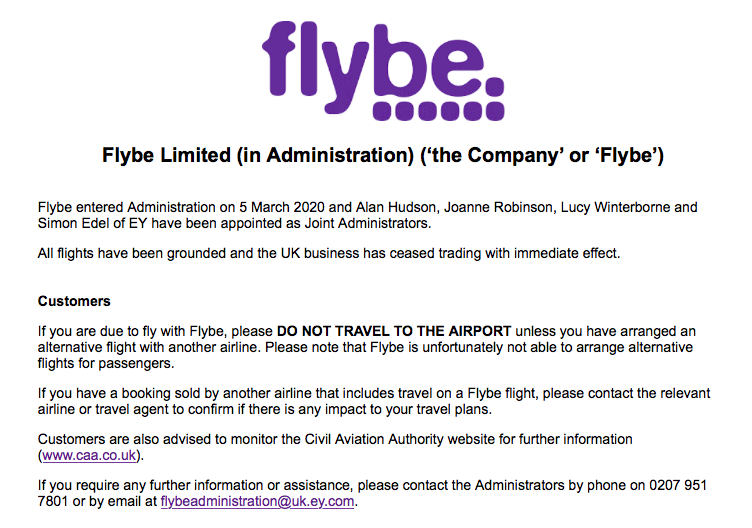 A great gin selection on Flybe

Although it is getting more and more common for airlines to go no-frills onboard, especially in economy class on shorthaul intra-European flights, at least it is great to see when an airline actually makes an […]

Eastern Airways is a British airline with its headquarters at Humberside airport in northeastern England. They operate mainly domestic flights to most corners of the United Kingdom including destinations such as Southampton, Cardiff, Aberdeen, Newcastle […]