The two Swedish airlines Malmö Aviation and Sverigeflyg are to create a new Swedish airlines. Serving 12 Swedish cities using Stockholm Bromma airport as hub the airlines are to merge into a brand new airline – BRA.

Although the name may sound like an odd choice to English-speaking people the name is in fact an abbreviation of Braathens Regional Airlines, which goes back to its roots, the airline Braathens, formed in 1946. The word ‘bra’ also has a positive meaning in the Swedish language meaning simply ‘good’. The new name will most likely be used in marketing campaigns and slogans, talking about a “good airline” with “good products” that is “good for the region”.

The airlines were formed in the 90’s and the beginning of the 21th century to get more competition in the domestic market to the national carrier SAS (and later the low cost carrier Norwegian) using Stockholm Bromma airport as hub. Today they account for a third of all domestic passengers in Sweden.

The new airline will be formally launched in 2016 with synchronised timetables, a common booking and check-in system and with a better planing and use of the aircraft operations, depending on the demand on different routes during various times of the day and the year. 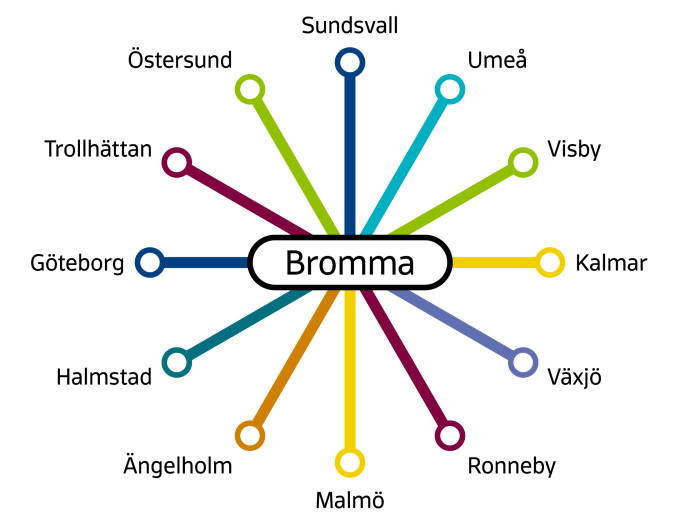 Gotlandsflyg is a regional airline in Sweden with its base at Visby airport. The airline was founded in 2001 by local entrepreneurs to get more travel options and lower prices from the island of Gotland, […]

Today Stockholm Bromma Airport, the city airport of Stockholm, turns 80. Quite a milestone for an airport still in full operation. The airport was opened on 23 May 1936 as the main international airport of […]